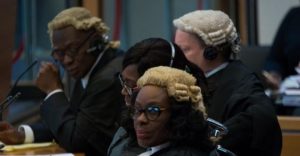 Former Member of Parliament for North Dayi George Loh has scathingly chastised the Attorney General for what he called a pathetic handling of the case involving eight members of the vigilante group Delta Force.

A Kumasi Circuit Court Wednesday May 17, 2017 struck out the case against the eight who allegedly aided the escape of 13 of their colleagues standing trial for assaulting the president’s Security Coordinator for the Ashanti region.

Charged with causing disturbances in court, resisting arrest and rescuing persons in lawful custody, they were released by the court presided by her Honour Patricia Amponsah for lack of evidence after ACP Darko filed a nolle prosequi to discontinue the case.

Their release angered the Minority in Parliament and a section of Ghanaians.

In a bid to exonerate the Attorney General (AG) Gloria Akuffo from the infamous release of the eight, the Information Minister Mustapha Hamid said in a statement that the AG was unaware of the decision by ACP Darko to discontinue the case— an assertion the lawyer for the eight, Mathew Appiah described as flawed.

Commenting on the development Friday May 19, 2017, on Morning Starr, Mr. Loh concurred with the lawyer of the eight scolding the Attorney General and her team for professional negligence.

“The Attorney General and her two deputies must stop sleeping, wake up from your slumber and do the right thing for mother Ghana,” he said.