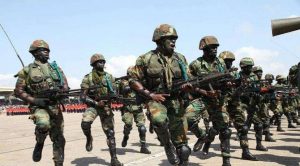 Fifteen armed men dressed in military fatigues, suspected to be army officers, have stormed the private residence of the main opposition National Democratic Congress’ National Organiser, Mr Kofi Adams, and seized all his vehicles in the company of four alleged National Security officers and personnel from the Driver and Vehicle Licensing Authority (DVLA).

According to Mr Adams, who said he is currently in Dubai, the soldiers ransacked his Tema Gulf City home on Wednesday afternoon and seized three Pick-Ups – two belonging to his brother – as well as a Land Cruiser, and another car of a make he could not readily recall.

The cars, according to the soldiers, were suspected to belonged to the state and were taken to the Flagstaff House.

Mr Adams told Asempa FM that the soldiers were led by one Captain Tandoh who said they were acting upon orders from the Minister of National Security, Albert Kan-Dapaah and the Flagstaff House.

“Why should this animalistic behaviour go on?” he asked in frustration.

Meanwhile, Mr Adams said he personally called Mr Kan-Dapaah to enquire if he, indeed, sent any soldiers on that assignment, but the Minister answered in the negative.