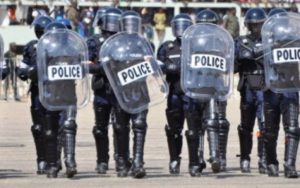 The Formed Police Unit of the Ghana Police Service has warned warmongers who may dare disrupt the ongoing voting process that they “will live to regret.”

Speaking to Class91.3FM’s Executive Breakfast Show host Prince Minkah on Wednesday, 7 December, Chief Superintendent Naa Hamza, the commander in charge of the unit said the police service has put in place a four-tier system to ensure peace and security.

The system includes officers being present at polling stations as well as the Mobile Patrol Team, the Rapid Intervention Force and standby teams being available at specific locations to give final backup if need be.

Meanwhile, the police service is deploying 64,000 security officers across the country to ensure peace and order during Wednesday’s general elections.

The officials are drawn from the police and other security services.

This was disclosed by EC Chair Charlotte Osei at a media briefing in relation to the election-conducting body’s preparedness for the polls.

The EC also disclosed that for security reasons, no motorbikes are allowed within a 400-metre radius of any polling stations. The sale of alcohol has also been banned within 500m of every polling station.

The EC boss added: “No mobile phones, food, pens or drinks will be allowed at the voting area.”