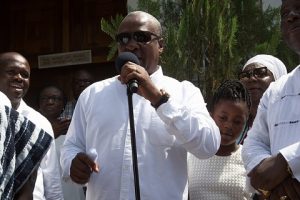 President John Dramani Mahama says “This is not the outcome we wanted and hoped for” when addressing Ghanaians after his defeat in the just ended presidential election.

He conceded defeat in the presidential elections after calling the main opposition leader, Nana Addo Dankwa Akufo-Addo of the New Patriotic Party (NPP) to congratulate him as the winner of the 2016 presidential race.

According to him “Every election is a hard fought battle, this is no exception. The people expressed their will and know who will lead them.”

He, however, assured a “smooth transition” and thanked God and Ghanaians for their help during his tenure –“I have done my bit for the development of this country. I would have cherished the opportunity to do more. I enjoyed working with the security and proud of them.”

The outgoing president also thanked his campaign team for their tremendous work – he wished the country well as he prepares to hand over the baton to the President-elect, Nana Addo Dankwa Akufo-Addo.