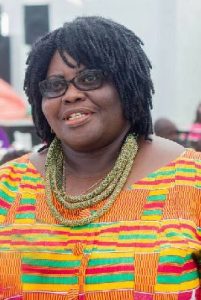 It has come to my attention that a portion of an interview that I granted Joy FM last Thursday 9th November, 2017, has been taken out of context and misrepresented in an online article written by one Abubakar Ibrahim.

A misleading slant was put on my words to give the impression that I endorse a viewpoint that I have made my life’s work of opposing. Even the title is mischievously skewed to serve the writer’s own prejudices and the general tenor of the piece ascribes to me, what is clearly the writer’s own stereotypical views on gender roles. After several phone calls complaining about the article, it still retains this distasteful slant.

I wish to state emphatically that I did not, have never and would never say such a thing. Indeed, it would be hypocritical on my part to advise other women to be stay-at-home wives when that is neither what I myself did, nor what I have taught and encouraged my own three daughters, all of whom are wives and mothers, to do.

What I said can be heard in minutes 36-43 of the interview: I stated that law teaching was my dream career and since teaching law and legal practice are both demanding careers; I could not have both and also be a good wife and mother. I told the story of the day I decided to quit practising on the side and said I realised that my male colleagues had wives at home to support them and as I was the wife who was “supposed” to be at home, I couldn’t do everything.

Lexis Bill, the host, asked if I literally had to sacrifice my career to be a mother. To this, I responded that it was no sacrifice for I did not enjoy it anyway and I did not think the extra money was worth abandoning my children over. But I must categorically state that I have never considered giving up my teaching career in addition to practice.

He asked my advice to modern women trying to find a balance between work and family. My response was – and has always been – that women have to make some tough decisions; that because they do not have the support that a husband has, they cannot do too many things at the same time. At no point in that interview or anywhere else have I held the view that women must stay at home to look after their children. Indeed, my last comment on that section of the interview was that had I not given up practice, I would probably not be a professor now.

As my many former students will testify, I encourage, particularly married women and mothers in my classes not to drop out; to organise their affairs to allow them to pursue their dreams, but to know that there will be tough decisions they will have to make and to be strong enough to make them.

While I have the greatest respect for women who choose to be stay-at-home wives to take care of their children, I have always counselled that a woman should be wary of being incapable of caring for herself or her children. What I have seen early widowhood put unemployed mothers and their children through over the years has convinced me that a woman should always seek some measure of economic self-support.

I am deeply distressed that the message of a pleasant interview should be turned into so grotesque a caricature of itself to support an agenda I have tirelessly campaigned against for much of my professional life. The distortion has occasioned a lot of confusion in the minds of young women I have been mentoring, and is capable of confusing many other young girls and women out there who may not have the opportunity to seek me out in person for clarification of the ideas I expressed on the show. The writer and Joy FM owe me an apology for these gross misrepresentations, and I hope they will do the right thing and correct the misconceptions that they have wilfully generated.