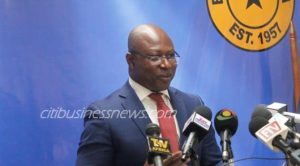 The Monetary Policy Committee (MPC) of the Bank of Ghana will next week Monday, announce its policy rate for commercial banks in the country.

The announcement will conclude the MPC’s 73rd regular meeting which starts this Friday, November 14.

For the fourth consecutive time this year, the MPC kept the policy rate unchanged at 26 percent at its last meeting in September.

Governor of the Bank of Ghana, Dr. Abdul Nashir Issahaku explained that the decision was mainly influenced by a gradual decline in real inflation as at August 2016.

“Food inflation, which had increased steadily for 25 months, declined for the first time in August mainly on account of favourable seasonal impact. Non-food inflation, however, remained sticky within a tight band of 24 – 25 percent before falling sharply to 21.2 percent in July as favourable base effects set in,” the Executive Summary of the September 2016 Monetary Policy report stated.

It added, “In line with these trends, core inflation (headline inflation adjusted for energy and utilities) is also on a descent suggesting subdued underlying inflation pressures.”

The MPC is also optimistic a further decline in inflation as marginal volatilities in the ex-pump prices as future crude oil prices are projected to remain fairly stable for the rest of the year.

“The MPC decided to maintain the policy rate while alluding to risks that may threaten the inflation outlook over the forecast horizon. The major risks were identified as unanticipated shocks emanating from ex-pump petroleum prices and utility tariff adjustments,” the MPC’s report further stated.

Meanwhile inflation for the month of October dropped to 15.8 percent from 17.2 percent recorded in September this year.

Despite this, the MPC also says it is working to meet its medium-term target band of 8 percent plus or minus 2 by mid-2017.