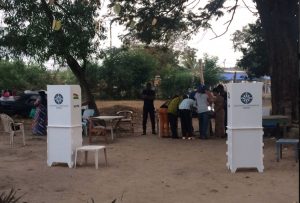 The December 7 polls in the La Dadekotopon constituency started close to an hour-and-half late in some polling stations as materials did not arrive early.

Class FM’s Robert Israel reported that four polling station at La Kpanaa had the polls opened at 8:20 am.

Hundreds of anxious voters started queuing up at about 3am but about 800 voters in a queue at one of the polling centres had to wait until an hour late before they started voting.

African Union observers had reported at 7:00am but no Electoral Commission (EC) officers were present at that time.

Ghanaians are voting to elect a president and 275 MPs to manage the affairs of the country for the next four years.