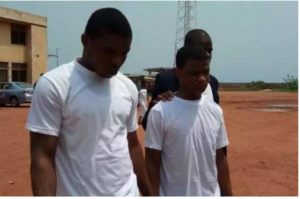 An Accra High Court has directed two alleged killers of the late J. B. Danquah Adu, Member of Parliament for Abuakwa North, to inform their lawyer of the new dimension in the matter so that he could appear in court.

It further asked the case investigator to assist the accused persons to get in touch with their relations.

Appearing for the first time before the High Court presided over by Justice Lawrence L. Mensah, a court of appeal judge sitting as an additional High Court judge, he said the trial could not begin because the State attorney assigned to the court had officially written to it indicating that state attorneys were undergoing training programmes as such could not be in court.

According to the court, the state attorney by name Sefakor Batsa was praying the court to adjourn the matter to May 5.

The court obliged prosecution’s request and adjourned the matter to May 5.

However, when the court asked the accused persons about their concerns, Asiedu told the court that they have not heard from their lawyer Mr Augustine Obuor and they could also not get access to him.

According to Asiedu, the last time they heard from him was before the committal proceedings at the District Court, adding that he could not access his relations either.

In the case of Vincent Bosso, he still stood by the assertion that he was innocent and was only picked up by the police. The court told Bosso that he would be given the opportunity to speak when the time comes.

On March 15, this year, an Accra Central District Court committed Daniel Asiedu aka sexy Dondon, and Vincent Bosso, aka Junior Agogo to stand trial at the High Court.

This was after they were served with the bill of indictment and summary of evidence. Asiedu has been charged with murder, conspiracy to rob and robbery. His accomplice, Bosso, is being held on a charge of conspiracy to rob.

Their counsel, Mr. Augustines Obuor, did not turn up during the committal proceedings At the District Court, Asiedu who had given seven different statements on different dates to Police denied killing the late MP.

He was unable to answer on an alibi put up by him at the court. According to the court, based on the inconsistencies in the statement of Aseidu, it was committing him to stand trial.

Asiedu’s accomplice, Bosso who intermittently wiped off tears, however admitted that he and Asiedu decided to embark on a robbery spree on February 8, 2016.

Based on that, Bosso told the court that, they all traveled to East Legon, however the two parted ways over a disagreement about which house they were to rob.

According to Bosso, Asiedu therefore took away from him implements such as the cutter, knife among others and he (Bosso) boarded a car and left the vicinity.

Mrs. Yvonne Attakorah Obuobisa, Director of Public Prosecutions (DPP), who read the facts out told the District Court presided over by Mr. Stephen Owusu that Aseidu resides at Agbogboloshie and Bosso was his friend.

Mrs. Obuobisa said the deceased Joseph Boakye Danqauh Adu was the MP for Abuakwa North constituency in the Eastern Region.

According to the DPP, Aseidu had been talking to Bosso to plan some robbery expedition and on February 8, last year, at about 11:30 pm Aseidu and Bosso armed themselves with various implements such as a screw driver, a cutter, and knife and left Agbogboloshie to East Legon on a robbery spree.

Mrs. Obuobisa said Bosso did not agree to that and this resulted in a misunderstanding between the two. The misunderstanding was so sharp that Aseidu asked him (Bosso) to hand over all the tools and they parted ways.

According to the DPP, Aseidu entered the house of the deceased and noticed that there was light in the MP’s bedroom upstairs and he could not enter the room through the window easily.

The DPP said Aseidu looked round for a ladder and with the aid of it he climbed onto the porch and entered through the window.

Meanwhile, around that time 11:40 pm, the deceased arrived in his house and went to bed. Asiedu on seeing lights on in the deceased room, entered and began to search the room. In the process, the MP woke up and attempted to stop Aseidu.

The DPP said Asiedu who had a knife stabbed the deceased several times in the neck and chest. The MP bled and collapsed.

Mrs. Obuobisa explained that, while Aseidu was stabbing the MP, he (Asiedu) also sustained various cuts in his palm and chest.

Asiedu found in the room three mobile phones and he escaped through the adjourning house and fled in the area.

According to the DPP, autopsy report indicated that the MP died of excessive bleeding. When Asiedu returned to Agbogbloshie, he requested for some warm water to dress his wounds and took the deceased phones for unlocking.

Whiles unlocking, the DPP said a witness saw blood stains and he got alarmed. The witness waited until he heard the news about the death of the MP and saw that the pictures on the deceased phone matched those that had been displayed in the media.

The DPP said blood samples were taken at the crime scene, finger prints were also lifted.

She said the finger prints lifted at the crime scene were identical to Asiedu and DNA analysis conducted also marched with Asiedu and the deceased.

In the case of Bosso he allegedly conspired with Aseidu to embark on a robbery spree.

Prosecution has tendered Post mortem report of the MP, Forensic DNA Report, Blood stained T-shirt of Asiedu, a Knife used by Aseidu, the three Iphones of the deceased.

Asiedu’s pair of slippers which he left at the crime scene, his prison records, and radiology report determining his age, his medical report had also been tendered.