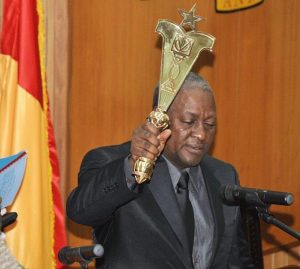 The Ghana spiritual guru and Okomfo Nana Kwaku Bonsam currently on vacation in The United States of America has added his voice to the Rev. Dr. Owusu Bempah’s prophesy of doom controversy by exposing the Ghanaian leader, His Excellency John Dramani Mahama in a dramatic way that will marvel the readers about who our leader is and from what background he comes from. Nana Bonsam who was interviewed by the PREKESE GhanaMedia’s representative in America, Begyedom Katakyie started the Interview with a DISCLAIMER: He said :” Tell Ghanaians that I, Nana Kwaku Bonsam remains neutral of any party, be it NDC or NPP or CPP. I am a patriotic Ghanaian who is carrying on my special calling as the divine priest and servant of the masses. I speak only the truth as my deities, ancestors and Nananom reveal to me, Nothing but the truth, and my people should pay attention and listen”.

Nana’s appointment for an interview to expose the President made us scared so we went online to check various sources what EXPOSE means: At Wikdictionary, Expose : To uncover, make visible, bring to daylight, introduce to:; Then at Free Dictionary.com.. Expose: To deprive, to make known:

The following is at http://www.merriam-webster.com/dictionary/expose

Definition of EXPOSE
1
a : to deprive of shelter, protection, or care : subject to risk from a harmful action or condition

b : to submit or make accessible to a particular action or influence ; especially : to subject (a sensitive photographic film, plate, or paper) to radiant energy

c : to abandon (an infant) especially by leaving in the open

2
a : to make known : bring to light (as something shameful)

b : to disclose the faults or crimes of
3
: to cause to be visible or open to view : display: as

a : to offer publicly for sale
b : to exhibit for public veneration
c : to reveal the face of (a playing card) or the cards of (a player’s hand)

d : to engage in indecent exposure of (oneself)
— ex·pos·er noun
After battling with all sorts of definitions, we settled on to make known as what Nana Kwaku Bonsam wanted to say about the President: what he would later say is very interesting.

Nana started by reacting to the doom’s day controversy that is emanating from Owusu Bempah’s so called Death Warrant for the President. He said, no where in any country would any good spiritualist make careless public pronouncement about a potential death of any leader. Owusu Bempah, even if he were right in his prophesy, if not seeking to score political points from any party should have sought audience with the President or his aides and deliver respectfully and in diplomatic way his prophecy of doom. By his choice of this mode of delivery, he exhibited bias and made himself suspicious of being an agent of someone. Nana never mentioned who Owusu Bempah is working for but ask Ghanaians to open their eyes and ears and watch what is going on. He said if Owusu Bempah were to be living in the United States, he would have been arrested the same day he made the so-called prophecy. ( hahahaahah Nana now speaks the American language). When we asked should the Ghana police or security services arrest, Nana said, he can’t take decision for them.

Nana then smiled and said Owusu Bempah does not know what he is saying because he does not really know who MAHAMA is and his background. Nana mentioned that President Mahama is a Northerner from Bole district, a Gonja and a royal whose faction of the gates in the North have the right to ascend the throne. He said Mahama is related to the chief of Bole and his father’s brother is the chief priest of the Manfru shrine. At Sonyakokpon, a relative is the caretaker of the shrine there. At Sawla Tuna , where the great deity Tigare originates from, Mahama has relatives working at the shrine. He also mentioned that the bosum Atia Mframa who is connected to Yapei is also a protector of Mahama.

At this time, we saw that Nana was sweating, we didnt know whether he was getting possessed or not but he continued to speak that the Ghana’s famous Larabanga Mosque’s Imam is also related to the President. Then Nana mentioned the great deity, Tongo which is worshiped by a section of the Dagomba and Mossi people as also a protector of the president. Nana went on to mention so many powerful shrines in the North i.e Busunu, Munfro, Gbanwoo Hamile, Kusawgu and Mpaha etc that he said are all powerful deities who are behind the President. Nana summarized his reaction with a proverb in Twi that” Nny3 ehu Mbob) a Nkye Articular car hyia Tico nnkye onnpa no ho na obehuri ada no so” literary responding to the silence diplomacy that the President has assumed because he knows that he has so many religious leaders and benevolent spirits including Imams, Mallams, Akomfo and genuine pastors not occult practicing “men of God” to prophesied doom for him.

Nana called on all peace loving Ghanaians to continue to pray for the President and advice the President to also pray for himself and the family. He warned him not to despise or severe ties with the Rawlingses with 2 proverbs ” Okomfo bone a wo te na Yarefo) ho ma Komfo Papa aba sa no yare no, wonnyi no akwa”….to wit….Never condemn the supposed bad priest who kept the sick alive for the so-called good one to come and heal him. The other one he said : “Nia woapot) ma afe no, onkyir fabom”…..That President Mahama should not make the mistakes of the late ex-President Atta Mills and make sure he listens to the advice or consult the grandfather of his party.

He took the opportunity to wish all Ghanaians good luck and ask for intensive prayers for the nation because to some people they want Ghana at war. He called everybody to take hate out of their lives and embrace peace and tolerance for the good of the nation