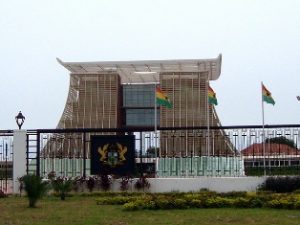 The Bureau of National Investigations (BNI) has picked up a member of NPP Presidential candidate Akufo-Addo’s security detail and one other supporter while they are jogging by the Flagstaff House in Accra.

The incident happened last Sunday morning at about 8am, New Patriotic Party member John Kumah told myjoyonline.com, after he was granted access to the two Tuesday.

He said Jalil Bawa, a former police officer and a member of the security team and Alhassan Abubakar who is in his late 20s.
The two who live in Nima, a community in Accra, were jogging by the seat of government when Abubakar’s keys fell into the sand.

They stopped to retrieve the key and continued the exercise. But about 50 meters away, two security officials accosted them and accused them of planting something in the ground.

Despite their explanations, the security officials walked them back to the spot where the key fell and asked that the dig around the area to be ensure they had not planted ‘juju’.

“There was nothing there” John Kumah explained. He said one of the security officers identifed Bawa as a former police officer who left the service and joined the NPP security team.

The new fact completely changed the dynamics of the investigations. Several security officers poured out of the Flagstaff House and the two were led inside.
They were later taken to BNI cells. Their families had been searching for them until checks revealed they had been picked up.

No charges have been levelled yet and according to John Kumah, the two cannot be granted bail until their ‘busy’ superiors are available for office work.