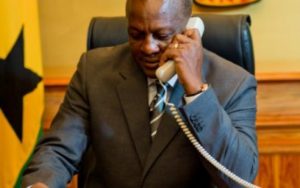 President John Mahama has conceded defeat in the 2016 elections and has called the opposition leader Nana Akufo-Addo to congratulate him over his victory, press secretary Eugene Arhin confirms to Starrfmonline.com.

The NPP swept the majority in Parliament with over 150 seats.

President Mahama becomes the first sitting president to have lost an election under the Fourth Republic of the 1992 Constitution. He also becomes the first one-term president under the same Republic. Mahama led the ruling NDC to power in 2012 following the death of his former boss Prof. John Evans Atta Mills ahead of that year’s election.

The Electoral Commission is expected to declare its official results on Saturday.

Akufo-Addo is a former Attorney General and Foreign Affairs Minister under the erstwhile Kufuor administration and has been eyeing the presidency since 2008. Late president John Mills beat him in that year’s election after a run off and resurfaced again in 2012 to be defeated by incumbent Mahama.

Nana Addo’s vice president is an economist Dr. Mahamudu Bawumia, who was a former deputy governor of the Bank of Ghana.