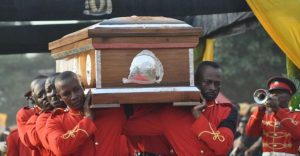 After 111 years on Mother Earth, 39 of which was spent as the queen mother of the Ashanti Kingdom, the late Nana Afia Kobi Serwaa Ampem II was yesterday given the final farewell on her journey to the “village”.

She was buried under the cover of darkness at the Breman Royal Mausoleum (Ban mu) this dawn.

That was after her remains had made a brief stopover at the Bantama Royal Mausoleum for the final traditional rites.

Some Ashanti chiefs and queen mothers had been buried at the Bantama Mausoleum and, traditionally, there is the belief that the Asantehemaa had to meet and interact with them before moving to her final resting place at Breman.

Prior to the departure of the body from the Manhyia Palace, a two-hour church service, superintended by the Anglican Church, had been held for her.

After the church service, the Ghana Armed Forces accorded the departed Asantehemaa military honours by playing the Last Post for her.

Thereafter, the casket containing the remains was carried by military pallbearers into a military vehicle.

It was taken back to the Asantehemaa’s Palace at 4:30 p.m., closely followed by the Asantehene, amidst drumming and dancing.

A large crowd filled the Dwabirem of the Manhyia Palace yesterday to pay the late queen mother their last respects and bid her farewell.

Thousands of mourners, clad in black and other mourning cloths, thronged the durbar grounds of the palace where the burial service was held for the 13th Asantehemaa.

The service attracted many dignitaries, including a large delegation of the clergy.

There was a large representation from the Anglican Church, the denomination to which the Ashanti monarch belongs, the Methodist Church, the Catholic Church and the Pentecostal and Charismatic churches.

Among the large number of dignitaries who witnessed the burial service were the President, Nana Addo Dankwa Akufo-Addo, and his wife, Madam Rebecca.

While former President Rawlings was there with his daughter, Dr Zanetor Rawlings, the Member of Parliament for Klottey Korle, Mr Kufuor arrived at the venue with a large entourage.

There was also a large delegation from the Embassies and High Commissions in Ghana.

The Apostolic Nuncio to Ghana, the Most Rev. Jean Marie Speich, was also at the palace to represent the Pope.

Before the burial mass, which was officiated by the Most Rev. Dr Daniel Yinkah Sarfo, the Metropolitan Archbishop of the Anglican Church, West Africa Province, the rich Asante tradition and culture was on display, as mourners in black cloths tried to make their way to the service.

The Asantehene, Otumfuo Osei Tutu II, who had earlier sat in state at Dwabirem around midday, left the grounds to perform traditional rites where the Asantehemaa had lain in state before the remains were moved to Dwabirem for the burial service.

Escorted by the Asantehene, who sat in a palanquin, the remains of the queen mother were handed over to the Anglican Church for the service to start about 2 p.m.

In his sermon, the retired Bishop of the Methodist Diocese of Kumasi, the Rt Rev. Prof. Sarfo Kantanka, challenged religious leaders not to shun traditional leaders and see them as idol worshippers.

Instead, he said, they should accept traditional leaders and accord them the necessary respect, as they too could be good Christians.

He said through motivation and encouragement by religious leaders, traditional rulers could become good leaders.

The Rt Rev. Prof. Sarfo-Kantanka quoted Revelations 21: 24-26 as the basis of his exhortation.

He asked the bereaved family not to mourn the departed Asantehemaa but be proud of her achievements.

According to the retired bishop, the late queenmother led a good life and was joining her ancestors to watch over the Asantehene.

The Rt Rev. Prof. Sarfo Kantanka said the late queenmother saw the potential in her son (Otumfuo Osei Tutu) and nurtured him to become the Asantehene.

That, he said, was the mark of a good mother and urged all mothers to emulate her example and guide their children to become good leaders.

He said many children today accused their mothers of being the cause of their woes in life, saying “this has been fuelled by some prophets who mislead the people”.

He advised the Asantehene to make her mother proud by leading an exemplary lifestyle that would bring honour to his mother.

The Rt Rev. Prof. Sarfo Kantanka advised the Asantehene not to emulate King Solomon’s leadership style, even though some Kumasi residents had likened him to the Biblical King Solomon, and instead emulate that of King David.

Explaining, he said unlike his father King David, King Solomon did not end his reign well, while King David did and lived to a ripe age.